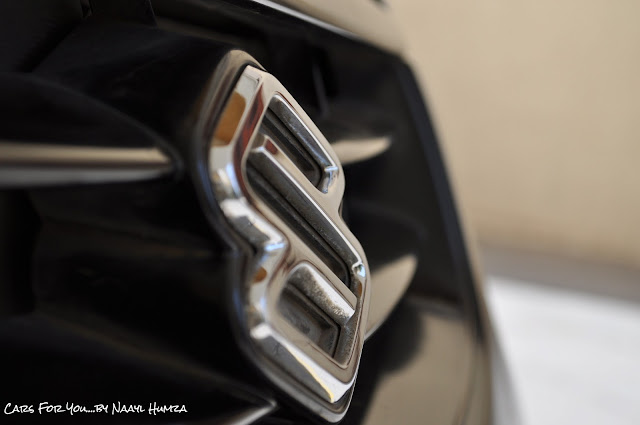 The Caprice rolled out of our drive way in 2004. Dad drove the Caprice as well as a Maruti 800. Now that the Caprice was gone, dad started looking at compact, easy to maneuver cars to replace the 800. So that's how he stumbled upon the Alto.
She rolled into our driveway some where in the middle of 2005 - with the elegant silver paint job and the glistening Suzuki badge on her grill. I was around 6 then. Though I couldn't really understand a thing about cars, all I knew then was the jumpy excitement of a new car rolling up our drive way ! 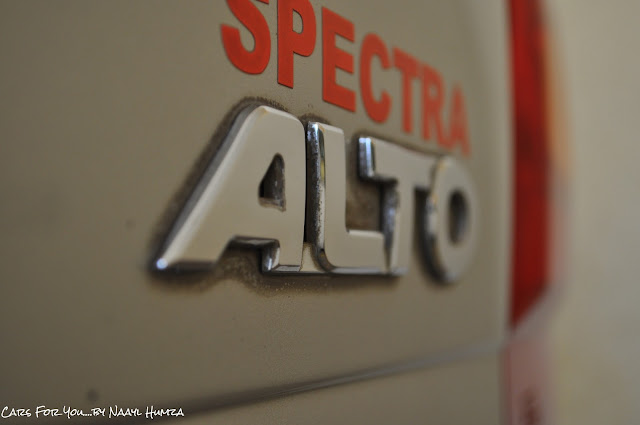 That "Spectra ALTO" badge has been there since ages... It's been there for 8 years now and is still intact in it's more or less new state ! Another sign of how much dad LOVES this car, and how well she's been taken care of !

Moving on to the Interiors:

So, there's not much to boast about here. Well, except simplicity. And serenity. Tranquility too. Well, enough of this. Lets just describe the car's interiors as inspired by the Japanese concept of "Zen". 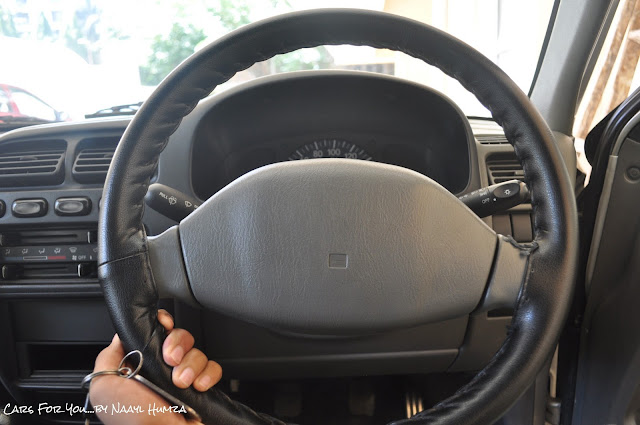 So, here's the steering wheel. Pretty plain Jane. No modern bells and whistles here. No on steering controls. But it is light. And makes the car easy to drive. The plastics still look okay owing to the fact that dad constantly gets this car serviced. The leather wrap is an after market add-on. 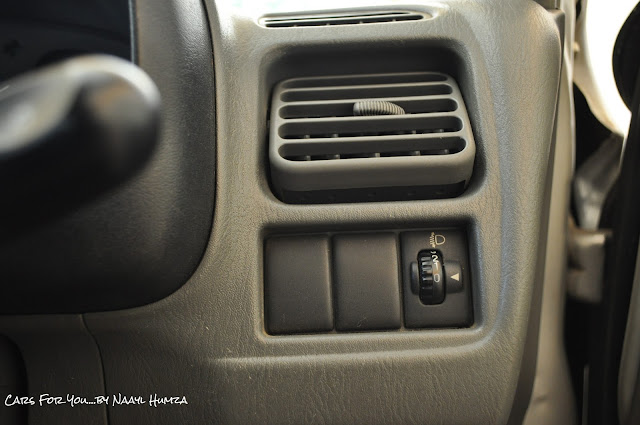 This is to the right of the steering wheel. Two dummy switches, and a headlamp leveler. 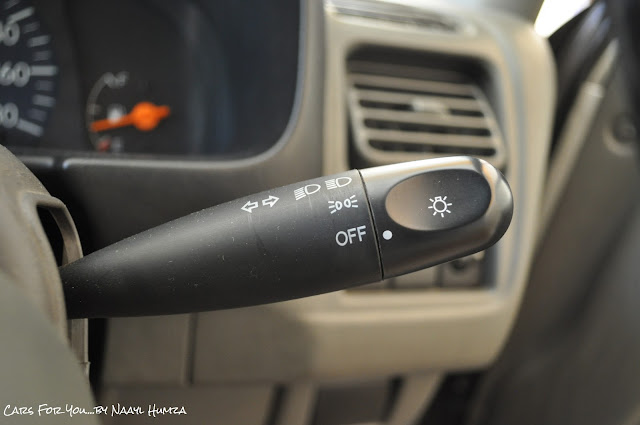 Again to the right of the steering wheel, here's the Headlamp and turning indicator control stalk. Plasticky, yet brute and durable. 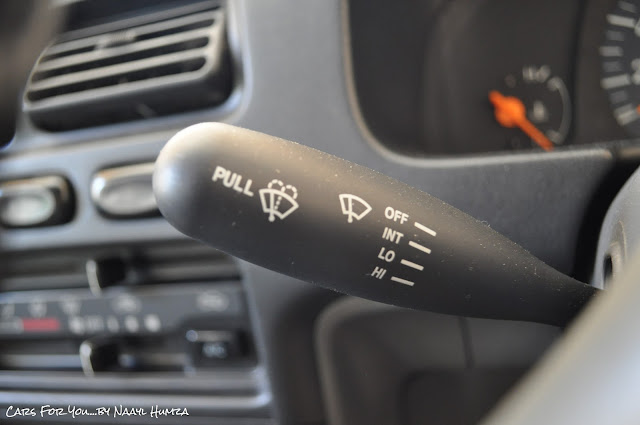 And here, to the left of the steering wheel is the trusty wiper stalk. Guess she's going to be used alot more now. (The monsoons've kicked in yesterday in Mumbai) 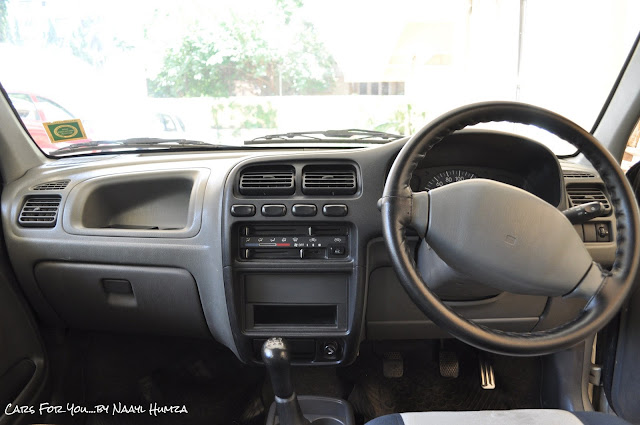 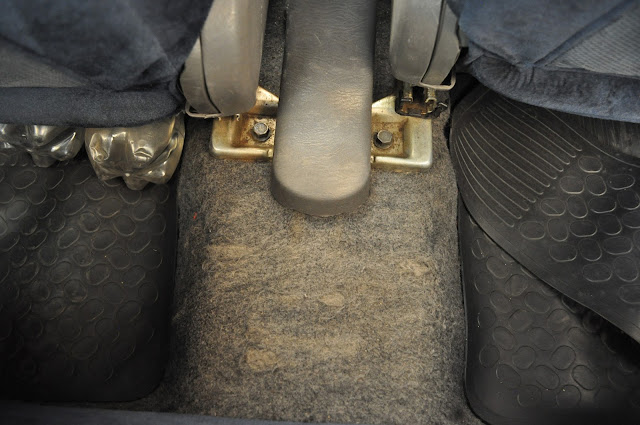 So, there's no obvious reason for this floor hump at the rear. That's because the Alto's got a Front Wheel Drive system, so there's no need for a transmission tunnel at the rear. But all I can conclude is that probably this hump was incorporated in the underpinnings for the 4 wheel drive Alto which was available abroad. 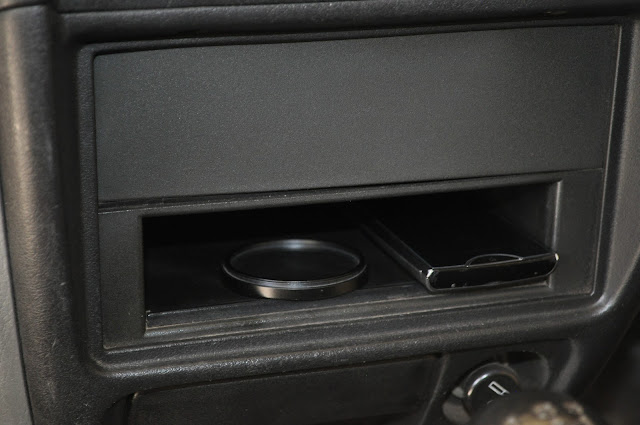 So the dashboard does have space for a two din Head Unit. But, we never got down to installing one. So, we've ended up using it as a tiny storage area. Seen here's my 52mm Lens UV Filter and my tiny Xperia Ray. 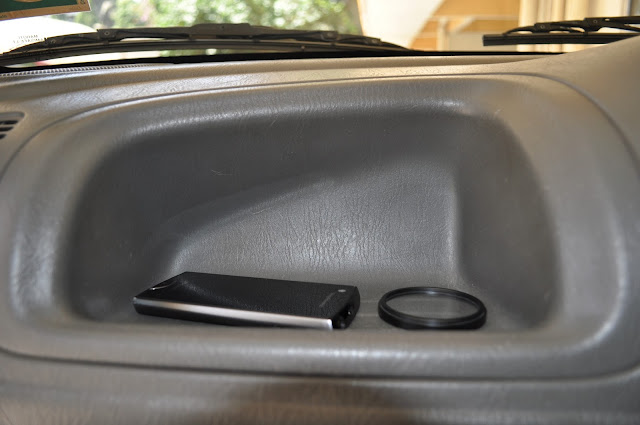 There's this scoop on the left of the dashboard. I'm guessing that this was the place the passenger airbag was installed in Altos sold abroad. But, this tiny nook does provide a bit of space for tiny stuff. My Xperia Ray fits in comfortably. But, my dad's Galaxy Grand doesn't fit in well. So that does give you an estimate of space. 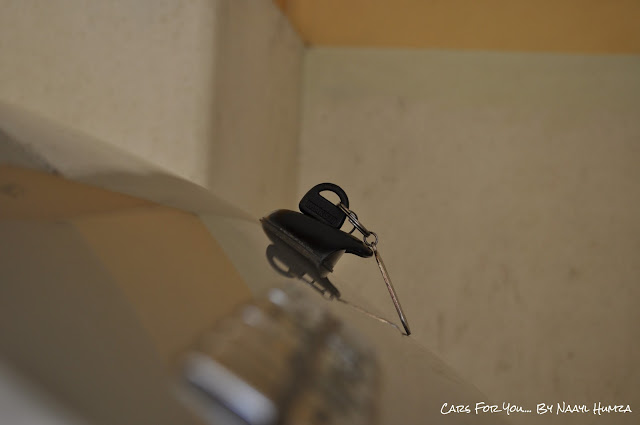 So, the boot opens. But, there's no button to push or lever to pull inside he cabin to open the tail gate. That's done by getting out of the car, and opening the boot with the key. Not really a convenience, but it's acceptable on a car which was bought 8 years ago. Further more, the boot is tiny. Really tiny. But, on numerous occasions, we've shockingly managed to pack in  a lot of holiday luggage ! 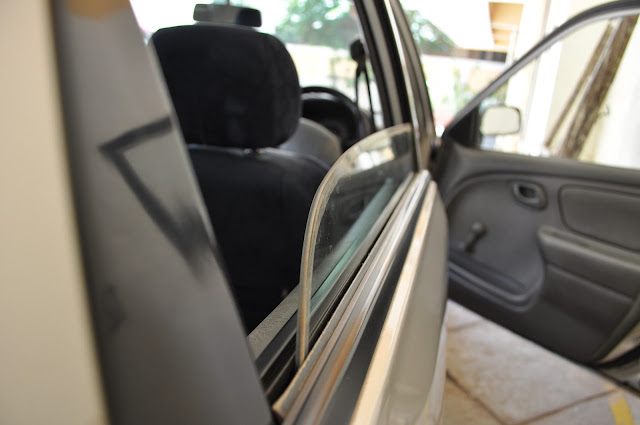 The windows on the front door go down all the way. But, on the rear doors, the windows go down three fourth of the way and don't go any further. 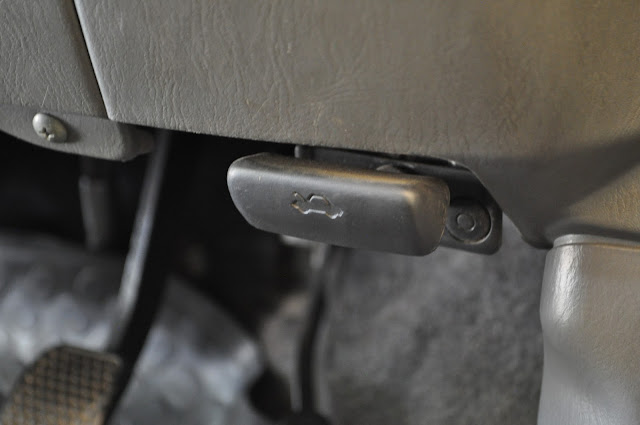 Pulling at this lever opens the bonnet. This car's bonnet is not house to a power house. It's house to a minuscule 3 pot engine. But the engine is EXCELLENT for short city runs. And, for getting through the chock-a-block traffic on Mumbai's streets.

Moving on to the Exteriors: 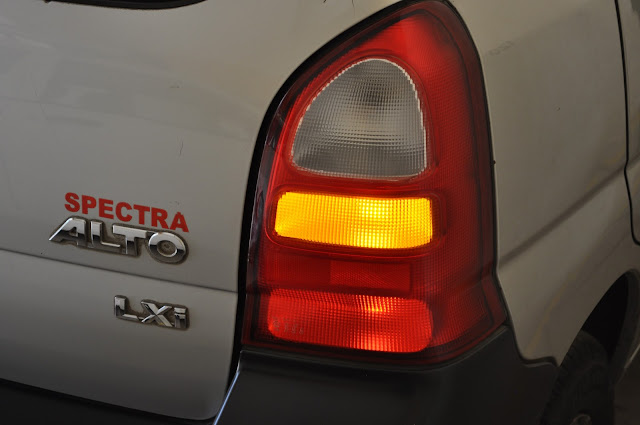 These are the 2005 Alto's tail lamps. Old school, no frills. But, they get the job done. They're not like today's LED containing lamps. However, they're well built and well looked after. I see numerous cars on Mumbai's road after the rains with headlamps and tail lamps full of water. But these lamps on our Alto, they've never broken. Neither have they ever leaked and allowed water in. That's clear proof of how well this car was built as well as how well dad's maintained her ! 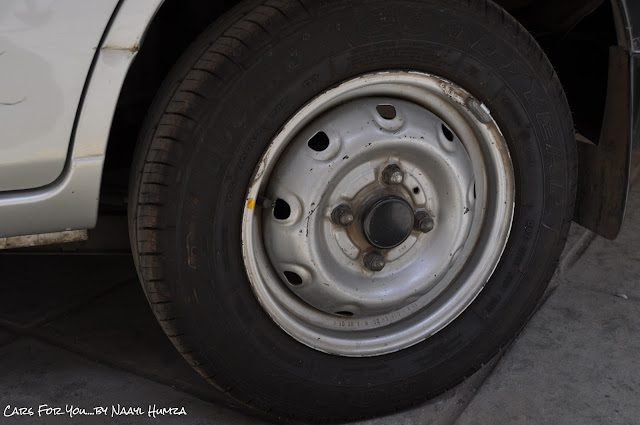 These are the car's knobby little tyres. Standard, factory fitted rims. No alloy or spoke business here. They came from the factory with tyres from JK Tyre, but down the way, dad's upgraded them to Goodyear tyres. 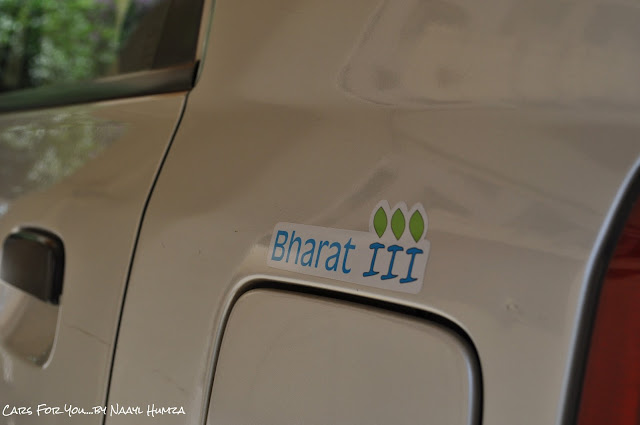 This car's passes the Bharat Stage 3 emission norms. These norms are the Indian equivalent of the Euro 3 standard. 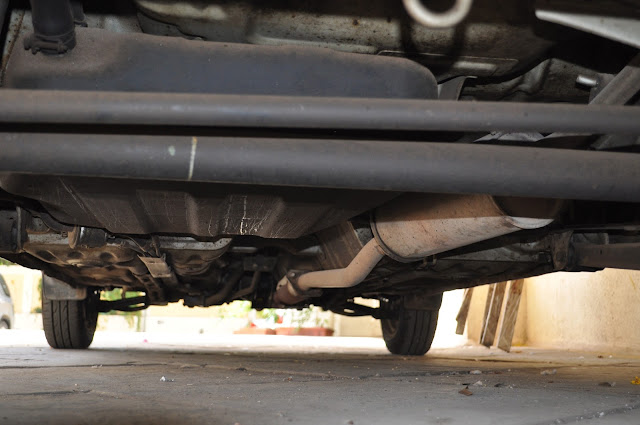 The under body is absolutely clean. There's no hanging wires here. Everything is well assembled. 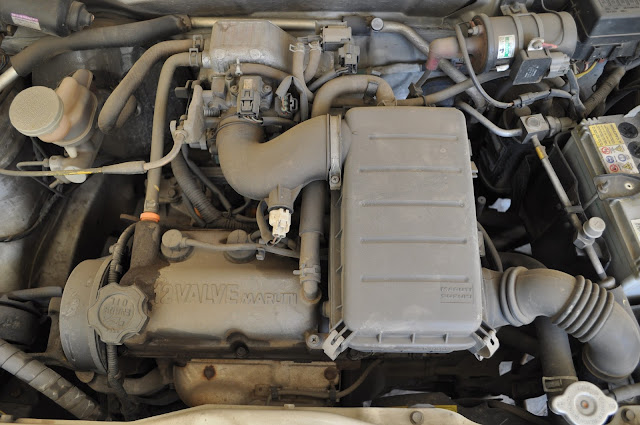 Here's the Alto's tiny 3 pot petrol engine. It's got 4 valves per cylinder and 3 cylinders in all. It produces 45 bhp accompanied by around 6 kgm of torque. It's mated with a 5 speed manual gear box. The engine can push the Alto up to speeds of 100 km/hr. But after that, the ride gets jittery and unstable.

This car's 8 years old. So, I can't really give it a rating. Further more, I can't say much about what it should have and shouldn't have. All I can say is that Old Faithful's served us well. Very well. She's faced the rains and summers of Mumbai. She's faced trips across the Western Ghats. She's covered around 50,000 kilometres in this lifetime of her's. Yet, she forges forward, not giving up on us once. Hence, hats off to Old Faithful !